To honor the last day of summer I decided to go on a walk at my favorite time of day. When the sun is starting to go down. You know, when everything is covered in a yellow glow. I put on my mp3 player, took my camera to take random pics & left my house. My goal was to find swings. I walked to a small park about a block a way & realized, it didn't have swings. So I started walking the opposite direction than I normally walk hoping to run into some swings.

I walked by the elementary school near my house. A group of young boys were playing football in the front yard of the school. I paused my walk to play football with them for a little bit. They accepted me well, especially since I'm a girl with cooties. I'm sure the fact that I can throw a mean spiral helped.

Then I made it to the school's playground. I found my swings. I put on the song Heavenly Day by Patty Griffin, turned it up as loud as I could & pumped my legs as hard as I could & swung as high as I could looking into the setting sun. It was wonderful. 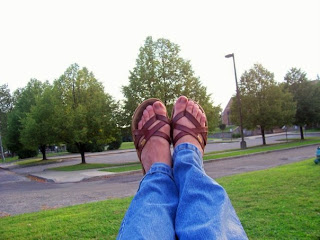 After I had enough swinging I started walking again. I saw a man riding his bike stop to help a man push his car that had broken down. I pet the dog of an old cowboy. I said hi to people I passed by on their front porches or walking down the street.

I walked behind some building & admired graffiti. I saw people going into the Catholic Church for the Hispanic mass and wondered why if we are all brothers & sisters we have so many seperate churches. Seperated by denominations, races, languages, nationalities, worship preferences, etc. 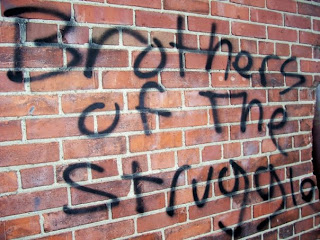 I passed a house with a big deck with a group of people wearing Colts' attire & watching the game on a big TV. In the yard the kids were eating ice cream & admiring their artwork they created with chalk on the sidewalk. I walked by & complimented them on their artwork. They made sure to point out the "Go Colts" they had written. I asked if the Colts were winning. As soon as I asked one of the guys cheered really loud. Me & the oldest girl looked at each other & said "must be!" & laughed. She told me that if her uncle was cheering it meant the Colts were winning. Then one of the boys showed off his empty bowl of ice cream. Then the youngest boy who was covered in dirt from head to toe with ice cream all over his face walked up to me & tapped me on my elbow (the highest point on me he could reach). I bent down to his level to see what he had to tell me & he said "they're watching football." Haha:)

Then I walked by a bright purple house & tried to pet several cats I met on my walk, but none of them would let me. This is why I don't like cats.

Then I made my way home feeling much warmer inside than I had when I left. 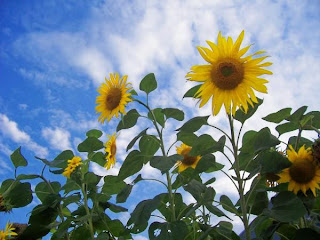