It was one of those days. One of those days that just feels right. The kind that you want to capture the feeling in a jar like you captured fireflies when you were 7. And then you want to run that jar home and show everyone what's inside. But days like this, you know you can't capture the feeling in a way that you can show it to someone else. It's just a feeling you feel deep inside of you & it pours out from within so that maybe someone passing you on the sidewalk will catch a bit of it in your smile.

It's the warm cloudy day at the end of winter. A day where the sun breaks through every once in a glorious moment and when it does, it looks like Heaven is shining down. But it doesn't need to, because this is the kind of day that reminds you Heaven is on earth and all around you.

It's the shy little boy from Iraq who doesn't speak any English who you just helped enroll in school. You know he is terrified, but you are filled with hope for his future, even though you know it won't be easy.

It's eating lunch and reading your new poetry book that causes you to laugh out loud at parts and for tears to come to your eyes at other parts.

It's the cool clothes you found at the thrift stores that actually fit you. It's the 15 new records you bought to play on your new record player. It's the conversations you had with the women working at these thrift stores. It's the little girl sitting on a chair singing "Jesus Loves Me" in the Salvation Army as she waits for her grandma to finish shopping.

It's the girl on the back of her boyfriend's motorcycle who spreads her arms out as they ride so she feels like she's flying. It's the smile she gives you at the stop light because she can hear Michael Jackson pouring out of your open car windows.

It's going for a walk when you get home and passing the 8-year-old boy you made friends with last summer. It's you getting him to toss you the nerf football he's holding & him saying "Nice catch! I didn't know you could play football!" & you telling him you have a real football and that you'll play with him this summer.

It's dancing down the sidewalk to the song on your mp3 player.

It's your neighbor introducing you to her dogs, but you forgetting to ask her her name.

It's crossing the bridge over the interstate and waving to all the people going home from work during rush hour for the weekend.

It's smoking that cigarette you found in perfect tact on the floor in your living room after your last party.

It's taking pictures of random things. 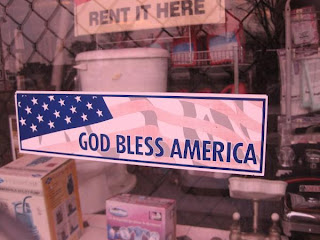 It's looking at people through diner windows.

It's sitting on your porch swing at dusk & drinking a Blue Moon & being reminded of almost every Wednesday night last summer.

It's thinking of about 50 journal entries throughout the day and knowing you will never remember them the same way when you actually sit down to write.

It's listening to Cat Stevens on record while trying to show people the feeling you captured in a jar today.
Posted by Jill at 12:03 PM