I'm getting better at this "real world" thing. At least dinner-wise. Well, at least in the past few days.

In college when we got tired of pizza rolls, taquitos, & peanut butter & jelly sandwiches we would walk to one of the 2 dining options on campus or take a trip through the taco bell drive thru. Making rice-a-roni or mac & cheese from the box was considered making an effort on dinner.

This Friday was a glorious evening. My roomie & I decided to actually attempt to cook something & for some reason we decided to try & make chimichangas. I don't know of anyone who has made chimichangas except for the Mexican restaurants I frequent so it seemed like a challenge, but we were up for it. So we went to the store & got what we thought we'd need. As we were baking the chicken we watched the final episode of the 3rd season of The Office & were SO happy that Jim & Pam were finally going to get together! So that started the great joy of the evening.

After that we went on to make our food. Neither of us have much common sense when it comes to practical tasks such as cooking & such so we had no idea what we were doing so just made it up as we went along. Finally we had our chimichangas made & sat down to eat & start on the 4th season of The Office. Time for the first bite, the moment of truth...THEY WERE SO GOOD! The joy of eating something so good is great in itself, but the fact that we made this wonder that was so good made the joy almost explode!

Our great evening continued to go on a great note as we walked to Radio Radio for a show. Cliff Snyder, Mandy Marie, & Joe Pug performed. We know Cliff & he was good as usual. Really enjoyed Mandy Marie too & she enjoyed us sitting on the floor in front of the stage. And I fell in love with Joe Pug. He got up to sing & I said "aw, he's so adorable." Then he started to sing & his voice blew me away. The lyrics of the song were amazing too. At the end of the song I looked at my roomie & said "I'm in love." And when I bought his CD I got to meet him too. Then Justin Townes Earle performed & he & the 2 other guys in his group were great as well. It was so much fun. I was reminded why I love the folk/country (not radio country) genre. 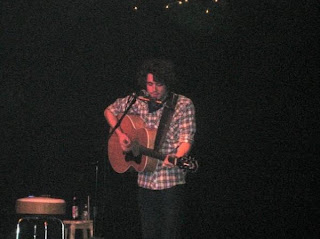 Tonight my cooking efforts surprised me again. I made chicken, mushrooms, rice, & broccoli. I ate on my front porch & the neighbors' dog joined me. He asked so nicely for some food & I gave in (don't tell his owners). I first tried to feed him some broccoli & he wanted nothing to do with that junk, but had no problem saying yes to the chicken or rice. I wasn't about to give him any of the mushrooms. I'm a sucker for dogs, but giving one my precious mushrooms would be too much. After we ate (he only got a couple bites, don't worry) we sat on the step & I pet him & we chatted a bit. I hope winter never comes.
Posted by Jill at 8:27 AM