The old man who lives across from me, he got a purple heart in the war. He walks slowly & with a limp, but he's outside almost every day working on his deck or in his flower bed. He has a huge American flag in his front yard.

The guy who lives beside me, he's kind of quiet and he works for a phone company. His wife or girlfriend (i don't know which) lives there too & she has a "what would Jesus bomb?" bumper sticker on her car. She loves animals & brings home stray dogs pretty often along with the two dogs & the cat she owns.

Near the old man lives a 40-something year old man who knows where to get moonshine. He has friends that like to sit on his front porch with him. They are perveted middle-aged men, but fun & harmless.

One of his friends is the stepdad of the 20-something that lives across the street. He quit high school, but worked hard to get his GED. He wanted to know if we had boyfriends.

Down the road lives an older woman. Well, I think she's younger than she looks, but life has worn her. She sits on her cluttered front porch and feeds peanuts to a squirrell she named Charlie. She's gotten some good pictures of him she says. She told me I was a cute little thing. and calls me honey.

In my backyard there are morning glories. We started with one single flower that came out every morning & disapeared by the time we got home from work. Our record so far has been 25 morning glories one morning. Now we are getting some along our front fence too.

Yesterday I went to see Anne Heaton perform. I went by myself. It was great. There was a man who drove all the way up from northern Kentucky for the show. He discovered Anne's music by randomly picking up her CD in the library. He once drove all the way here to see Missy Higgins too, but he missed her show. He got there in time to see her leave the building & got to talk to her.

There was a woman there by herself who was an obvious huge fan. She never stopped smiling during the whole show. The song about being a mom made her cry. She has all Anne's CDs, but bought one again last night because hers got a scratch & one of the songs skipped.

The cafe where the show was had a buffet that night that cost $12. The owner charged me $10 & gave me a piece of cake to take home. He's not going to have a buffet when Edie Carey is there next week b/c he knows she likes things on the menu. 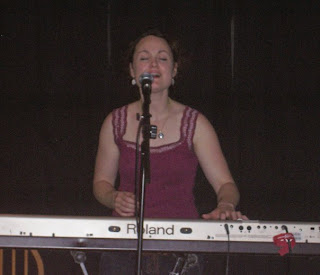