I've talked about the neighbor boy who lived beside my two friends before, remember, the kid who tried to cook a raw sausage over a citrinella candle? One day my cousin was hanging out with me & we were up in my bedroom & I heard a noise, then I saw that boy, another boy, and a girl leaving my yard so I figured they had knocked & that was the noise I had heard. Later I saw the kids come back in my yard so went to see what they wanted. The noise I heard wasn't them knocking on my door. It was my porch swing hitting my house. The kids were pushing each other on it as hard as they could.

So we made some rules. Swinging was allowed as long as they did it properly & they knocked on the door and asked first. No swinging when no one was home. It took a little enforcing, but now we have a great set up. Every once in awhile there is a knock on my door & I see little heads peeking in the window. They ask to swing & then they do. I normally go out & hang out with them & talk with them. It's fun.

The other day there was loud hard knocking & the two boys' faces peeking in the window. My roomie, our friend, & I answered the door expecting to be asked if they could swing. Instead two excited, breathless little boys informed us that they were selling kool-aid down the street for 50 cents & asked if we wanted some. Of course we did! And when we told them this you'd think they had won the lottery. "They want some!" they shouted & then ran off to tell their other selling buddies. We got some money & then skipped to the kool-aid stand where pretty much every kid on our street was working to sell some kool-aid. We were informed that refills were free & they were selling koolaid to get money to be able to go to the Dairy Queen at the end of the street. Later that day we found out they made $13 & went to DQ. 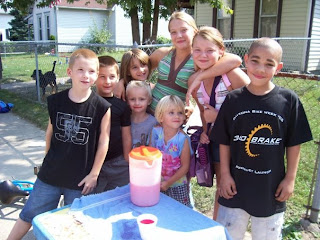