I should have written about this a long time ago but I forgot.  I recently heard Family Affair by Mary J. Blige and everytime I do I am reminded of this "little big thing" moment.

When Lilith Fair first became popular I was too young to go by myself and didn't have anyone who would take me.  I dreamed of going though and have loved many of the musicians that were involved in it forever.  Last summer (or was it the one before?) when they brought Lilith Fair back I was FINALLY able to fulfill my dream of going.

But something awesome happened.  When Mary J. Blige sang Family Affair EVERYONE danced and sang along.  The cowboy hat wearing clan in front of me were moving just the same as the groups of African Americans (although with a bit less rhythm) and so was the "typical" crowd.  I don't know if anyone else noticed it or if they were just paying attention to what the moment was doing for them, but I noticed it.  I looked around and saw how music brought so many different people together.  How despite the differences, this one song and moment brought shared smiles and movement to EVERYONE there. 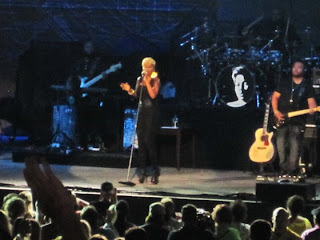