Thanks to Signe Pike's book Faery Tale (http://signepike.com/home/) I rediscovered & expanded an old love of mine- Fairies. 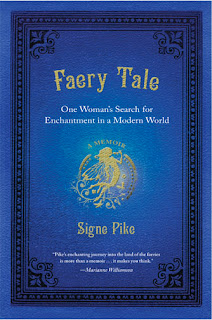 I was never crazy obsessed with them or gave them tons of thought, but I have always clapped my heart out in the part of Peter Pan that asks you to clap if you believe to save Tinkerbell. 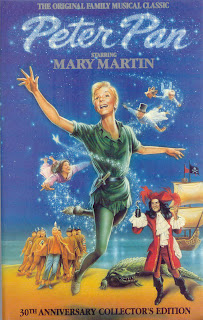 Anyway, Signe Pike's book tapped into my old love while expanded my view of "fairies" to a way that spoke to me and had meaning to me now.  Since then I have bought many books on "fairies," watched documentaries on the topic, google searched countless times, etc.  Since reading the book and attempting in my own ways to reconnect to and expand my old love, it's been amazing what I've learned and what things have connected.

I don't talk about it often as most people have a pretty narrow view of what "fairies" are and what someone who claims to believe in them are like.  And the fae is too complex of a topic to write about here.  I encourage you to get and read Signe's book or at least do some "googling" of your own to find some of the deeper meanings of the concept of fairies.

However, this blog is called, the little things are the big things, so I will attempt to stick to that topic and not go too deep below the surface.

As I've made clear, there is much deeper meaning to me now when it comes to "fairies" but this respark in the subject for me has led to some fun things.

For one, I have been able to have a lot of fun with the young girls I have nannied.  One, named Signe ironically, loves fairies because of the Tinkerbell movies.  She even made her own fairy house in her bedroom!  Often while I was watching her she would stop what she was doing & run to her room & check the house to try to spot a fairy.  I think she loved having an adult that shared and encouraged her belief (I should say another adult as her family does too).  While her knowledge of fairies was Tinkerbell movies, I was able to add some, like when she would get dissapointed when there wasn't a fairy in her house I was able to explain to her that just because she couldn't see them didn't mean they weren't there.  She and I used to write stories and I wrote one all about her and a fairy that came to live in her fairy house.  Her eyes and smile got huge as I read it to her the first time.  I also read to her a chapter book from the Tinkerbell series.  I think she also loved having someone she could show off her new fairy stuff (dolls, books, a fairy journal she created, etc.) to.  Another time I brought a book I got from the library that had stories about different types of fae and read those to her. 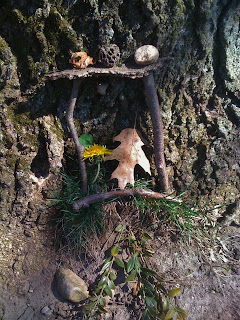 The other little girl I nanny for and I made fairy houses together twice. 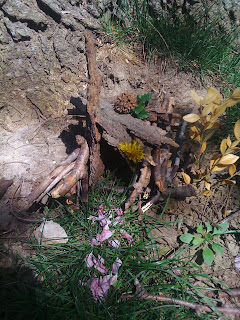 Thanks to the magazine Indianapolis Monthly I found out about Indiana's Stonehenge in Brown County.  Obviously a magical spot my roomie and I went there one day.  While there I found an obvious fairy doorway- 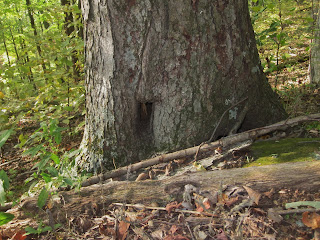 So I spruced it up a bit for them and left a little gift of chocolate & wine. 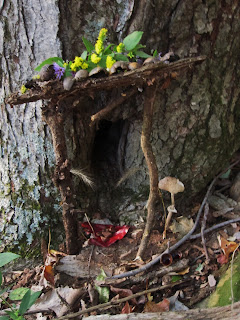 I posted these pics on facebook & Signe's (the girl I nannied for) mom left this comment- Signe wanted me to remind you to "keep checking it when you go back there, to see if the juice (wine) and chocolate are gone." Signe thinks you did "a very very very very good job."

My roomie went back to that spot another time and so I texted Signe's mom to tell Signe that my roomie said the chocolate & "juice" were gone.  Signe, being a super smart 5 year old said that an animal could have eaten it so I had to check inside & suggested I put out more food but cover it so animals wouldn't get it.  I texted my roomie letting her know Signe wanted to know if she had checked inside and my wonderful roomie said this "Yes I did...they are very sneaky and it looked like a good home, but they didn't want to be seen yet."  Upon relaying this message back to Signe she smiled, laughed, & jumped up & down.  I have gone back a few times since and always leave something for them.

And for fun, after I was a fairy for Halloween- 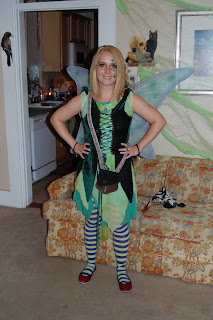 I had a photographer friend do me a little photoshop favor :) 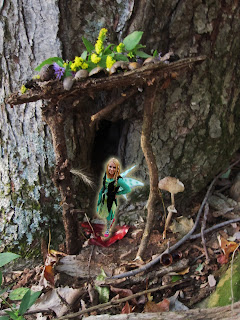 So one book, someone sharing their own story and journey, brought back childhood memories and dreams, led to me connecting to the imaginations of young girls, created a lot of fun for me, and has had a great spiritual impact on me.

So even if you don't believe in fairies (I'm clapping as I say this!), I'm sure you can appreciate aspects of this story and see again how "the little things are the big things."﻿
Posted by Jill at 9:59 PM